Typhoon in the Philippines : B-FAST reacts ! 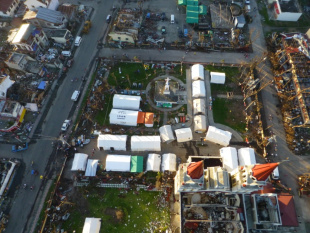 On 8 and 9 November a typhoon category 5 had made landfall on the Philippines. Wind speeds up to 300 km/h caused damages and victims. The Philippines authorities launched an international demand for assistance. On 10 November the Coordination Council decided to send a B-FAST team to the area of disaster. This mission consists of 37 people. Two modules are deployed: a advanced medical post and a water purification system. The B-FAST mission will initially operate for 10 days in the area.

On 15 November the B-FAST team has set up and put into production the advanced medical outpost and the water purification system. The first patients have been threated in the medical outpost and potable water has been distributed to local residents. The B-FAST Base of Opations is situated at Palo, a town few kilometers south of Tacloban and assigned to the B-FAST team by the Philippines government in consultation with the EU Civil Protection Team which coordinates on the spot all assistance efforts by participating EU Member States. Even more, the Belgian B-FAST team and the German ISAR team operate together on the same location.

In the meantime our B-FAST-team has treated over 200 patients and has performed multiple operations in the field hospital.

On November 16 November European Commissioner Kristalina Georgieva has paid a visit to the Belgian rescue team who was the first European operational team on site. During her visit, she expressed the will to foresee a longer stay for B-FAST.

On 18 November the B-FAST Governing Board (which assembles the concerned government departments: Foreign Affairs, Defence,  Interior, Public Health, Development cooperation, e.a.) decided unanimously not to prolonge the B-FAST mission in the Phlippines. According to Didier REYNDERS, the Minister of Foreign Affairs, this decision has been made on the changed situation: the massive influx of relief goods, the Philippines government regaining control over the situation in the disaster struck areas, etc. A non-governmental organisation has been identified to continue the humanitarian assistance in Palo for at least two months.

The medical outpost will be handed over to the Arbeiter-Samaritaner Bund and the water purification station to the local authorities.

After a successful and appreciated mission, the B-FAST team will return to Belgium in the weekend of 23 November.